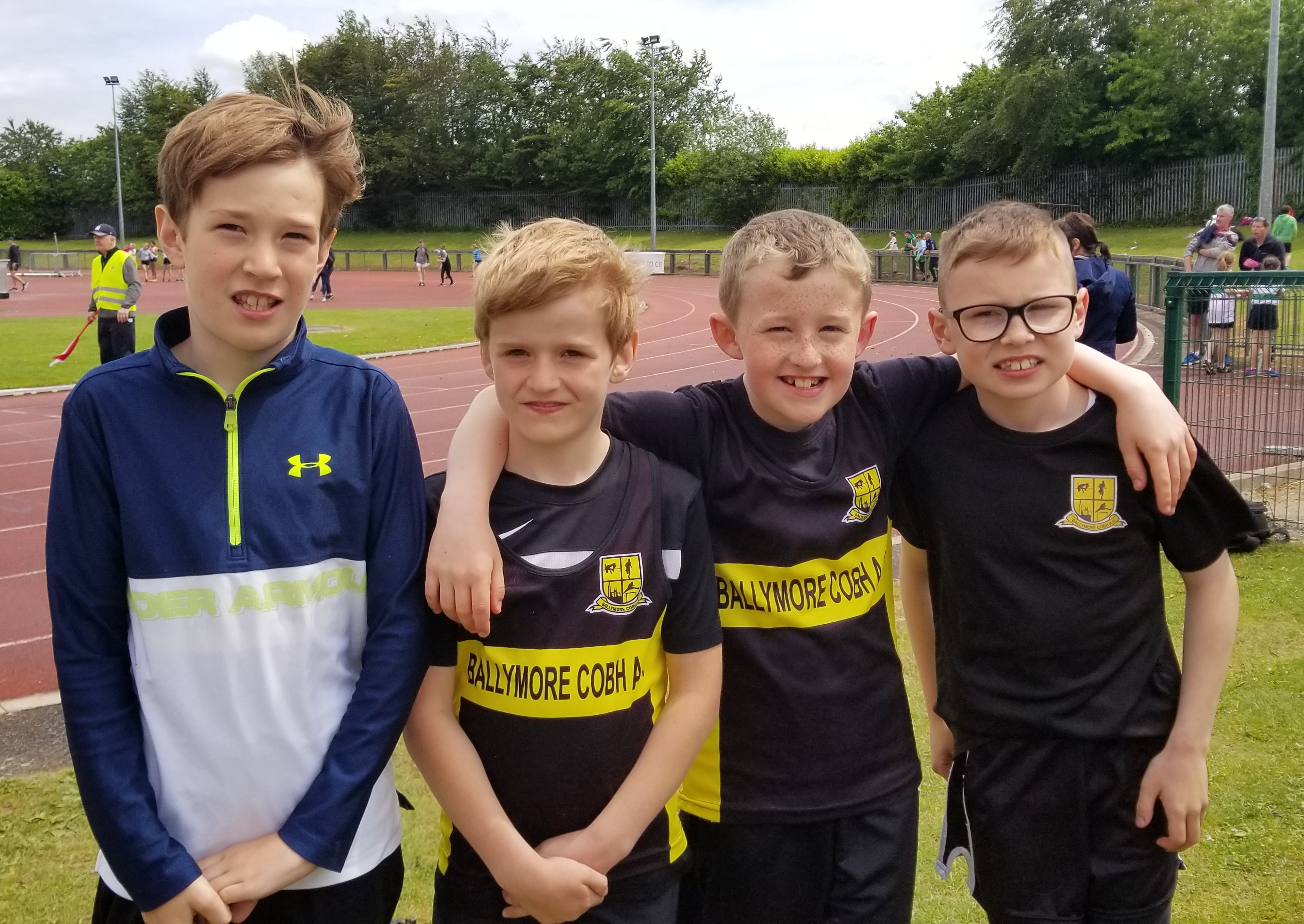 After being postponed due to bad weather in April the East Cork Championships Day 1 was held in glorious sunshine on Bank Holiday Monday in CIT.

Oscar Humphries, and Simon Casey competed in their first T&F Championships on Sunday. They both ran in the BU9 sprint and qualified for final from their respective heats, but lost out on a place for a medal in a very competitive final.  Both boys competed in the BU9 Long Jump where they also acquitted themselves admirably. Well done, boys!

Noah Houlihan qualified from his heat for the BU9 sprint final, and put in a fantastic run to take the Gold.  As anchor man, he ran a blistering final 100m to secure silver in the BU10 100x4 relay - up an age category for him.
Josh Dorgan placed 2nd in BU9 Long Jump with a of 3.02. He also qualified for sprint final, but did not medal. He ran first leg of BU10 relay helping to set the team up for Silver - up an age group.
Seán Twomey ran in the BU9 200m, he did well to finish mid field. Seán ran second leg of U10 relay, keep the team in touch for a Silver medal.
Noah Dorgan competed U10 Long Jump, took Gold with a jump of 3.30. Noah ran 3rd leg of BU10 relay, further helping the team take Silver.
Lara Balanzin qualified from her heat of GU9 sprint, and had a great run to take the Bronze medal. Lara also competed in LJ, and 200m.
Sarah Drumgoole ran well in her heat of GU9 sprint, to qualify for final but missed out on a medal in what was a very competitive final. She also ran in the 200m, and, put in a very strong final 100m, to finish in well up the field of 17 runners.
Lily Burke competed in GU10 sprint but despite a valiant effort, in what was a very fast heat, just missed out on a place in the final. Lily also competed in the Long Jump.
Ava Chandler just missed out on a medal, finishing 4th in U12 600m. She ran 4th leg in GU12 relay, securing a Bronze medal.
Lily Frawley placed 3rd in GU11 LJ with a jump of 3.25. Just lost out on 3rd place in last 50m of 300m. However, she earned herself a Bronze, running 3rd leg of  GU12 relay team - up an age group. Didn't qualify for final from sprint heats.
Cate Gilroy qualified from her heat for GU12 sprint final, where she ran brilliantly to come away with the Silver. Ran 1st leg of GU12 relay - Bronze medal.
Sonia Balanzin ran the 2nd leg of GU12 relay - Bronze medal for her efforts.
Sam Dorgan was back to form taking Silver in BU13 80m and Gold in LJ with a PB jump of 4.39.
Alex Buckley came away with Gold in BU16 100m, and also in 800m.
BU9 Relay - Silver
Joshua Dorgan
Seán Twomey
Noah Dorgan
Noah Houlihan
GU12
Cate Gilroy
Lily Frawley
Sonia Balanzin
Ava Chandler

Normally this event marks the being of the Outdoor T&F season but for many of our athletes this year it is near the end of the season. Well done to all who competed during the season and thank to parents, grandparents friends and family for the support throughout.