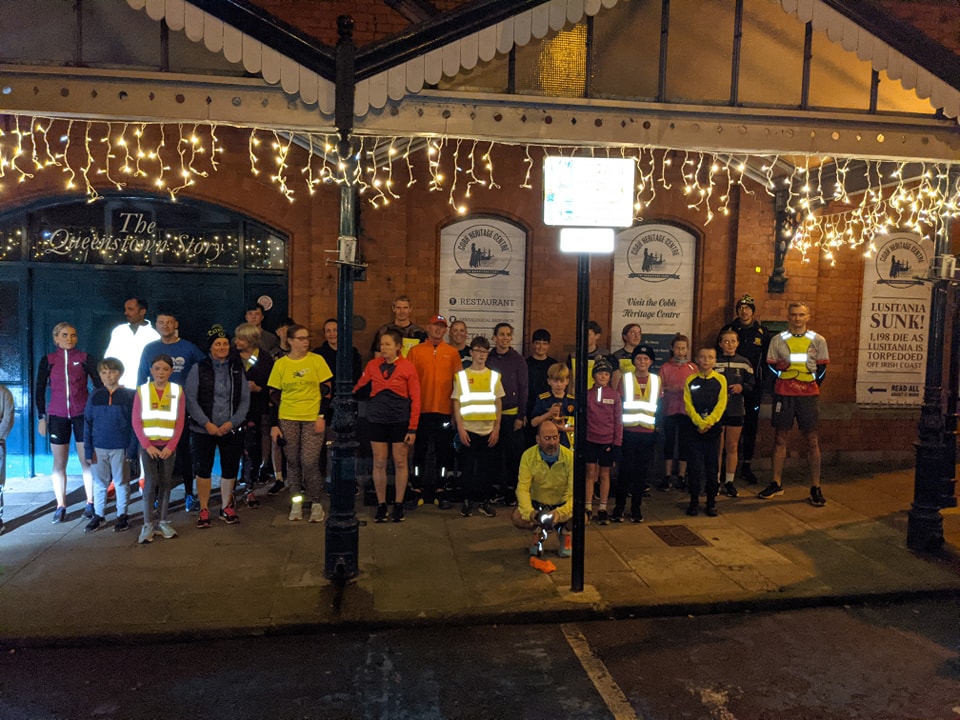 Tonight, was the inaugural Club Road Relay Race and what a night it was!

The teams were put together by the club race committee (Lorraine Manning) and, after studying the form and results over the last few months, each team was configured to have a juvenile and two seniors. Now some teams had OAPs instead of seniors (so fair play to Kevin Jones, Stephan Ryan and Shane Meyler).
There were some last minute adjustments to teams as a few runners had to pull out and three teams had two juveniles in them and three juveniles had to run the middle (longest) leg. Alex was always going to run this leg as he was an outright winner a few weeks ago. Lee stepped up as did Bridget to the same leg. In the main, we tried to have the juveniles on the last leg and I know the senior members did not mind them taking the glory.
Following the win by Team 1 (Rachel Carey, Bartlomiej Ludka and Aisling O’Leary), Team 4 were led home by Dáire O’Leary then Team 3 by Sarah Drumgoole, Team 2 by Luke Meyler, Team 5 by James Drumgoole, Team 6 by Brooke Manley, Team 7 by Ryan Brady, Team 8 Max OKeeffe, Team 9 Ryan Maher and Team 19 by Karen Leahy.
We would like to thank every runner for turning up tonight and supporting this event. And also the people who turned up to support the runners. We had a huge number of people lining the end of the five foot way cheering them on. And as time went on members of the general public had stopped to watch this show of athleticism and support. Who couldn’t help but get wrapped up in the cheers and clapping.
Thank you as always to Mary de Barra for doing the start and finish line timing. She always provides the boot of her car for jackets and refuels the runners after. Thank you to Stephen Pender for coming out as always.
I’d like to thank the runners who are always there for the League. Without you bunch this league would die out. Thank you to the Tigers Coaches Shane Meyler and David Barrett.
Tonight was the first night we had prizes for our club league. The prizes were sponsored by Alan Corcoran of Corcoran's Centra Rushbrooke COBH, Thomas Cahill of Roca Sports Ireland and Cormac of Keen House/Keen on Sport Cobh. I would like to extend our thanks and appreciation to these three businesses for providing the prizes.
Following the prize presentation, we couldn’t leave without wishing our fellow Ballymore Cobh AC member, our friend, our neighbour and our hero a very happy birthday. So we lit a candle on a chocolate donut and sang Happy Birthday to Sonia O’Sullivan.
The club is incredibly lucky to have such a dedicated coach and volunteer as Lorraine.
Scroll to top